The American Folk Art Museum’s Emelie Gevalt curated this exhibition of thirteen signature quilts from the Museum’s extensive quilt collection, drawing on the work of past curators Elizabeth V. Warren and Stacy C. Hollander. The show opened at the Museum’s Self-Taught Genius Gallery in January 2020; although the gallery is temporarily closed to visitors due to the pandemic, all the quilts can be seen online, and Emelie has taped a virtual tour that can be accessed here. Emelie and the Museum kindly allowed us to share some of the quilts and exhibition text with you.

By its nature, the signature quilt is meant to be read not only as a whole but also square by square. Although the form is known by various names—including friendship, album, and fundraising quilts—what all of these types share in common is the composite nature of the quilting project, in which individual signed blocks have been brought together to form a larger design. Often a group undertaking, each block was typically named for, and frequently made and/or paid for by, a different member of a community.

In this sense, the signature quilt holds symbolic value not only as a record of shared creative endeavor, which is the case for many quilts, but also as a legible record of relationships between the quilters and their communities, as well as between the part and the whole. As documents of past networks, such objects extend a sense of interconnectedness into the present, drawing viewers into a web of historical linkages in tandem with the visual interactions between blocks.

Like the systematically articulated branches of a family tree, the signature quilt simultaneously lays out and pulls in, engaging us in a simile of the group’s structure, and of the object’s dynamism, as we expand and contract our focus to take in both large and small.

The American trend towards signature quilts began in the mid-1800s and was reignited in the late nineteenth century. Inspiring a fad with numerous variations, the form itself likely developed in part from a fashion for autograph albums, popular in the United States by the early nineteenth century. Similar to the guest book or later yearbook, an autograph album served as a forum for preserving personal connections, collecting inscriptions from friends and acquaintances as mementos of relationships, in keeping with the era’s culture of sentimentality.

The signature quilt takes up the spirit of this social ritual and enlarges it, demanding greater ambition from its participants and a bolder display for its finished product – an expansive bedcover or showpiece that would have a regular presence in a domestic interior, a reminder of community, bound together both literally and metaphorically by connecting threads. Such visual and material symbols would have served as powerful constants during times of familial and social change.

Album quilts display blocks with an array of different patterns, often featuring pictorial appliqué images. Such designs became so popular in Baltimore that the trend developed into a distinctive, especially elaborate variation, sometimes undertaken as an individual project. Possibly indicative of this practice, only some Baltimore style album quilts bear names, although their design recalls that of signed examples.

Some of the most elegant mid-nineteenth-century album quilts were made in Baltimore, Maryland, typically by members of the Methodist and German Reformed congregations of the city. These quilts are characterized by their elaborate appliquéd pictorial imagery and creative use of fabrics. This variety was facilitated, in part, by easy access to a wide range of textiles that were imported into Baltimore’s commercial harbor.

Scholarship suggests that Baltimore album quilt blocks may have been designed and made by single individuals for purchase and assembly by other quilters. This example is one of a group that has been attributed to the same designer, possibly Mary Heidenroder Simon. After describing a quilt featuring similar images – including cornucopias, wreaths, and an eagle – a 1850 diarist recorded a visit to “Mrs. Simon’s in Chesnut [sic] St. The lady who cut & basted these handsome quilts – saw some pretty squares.” 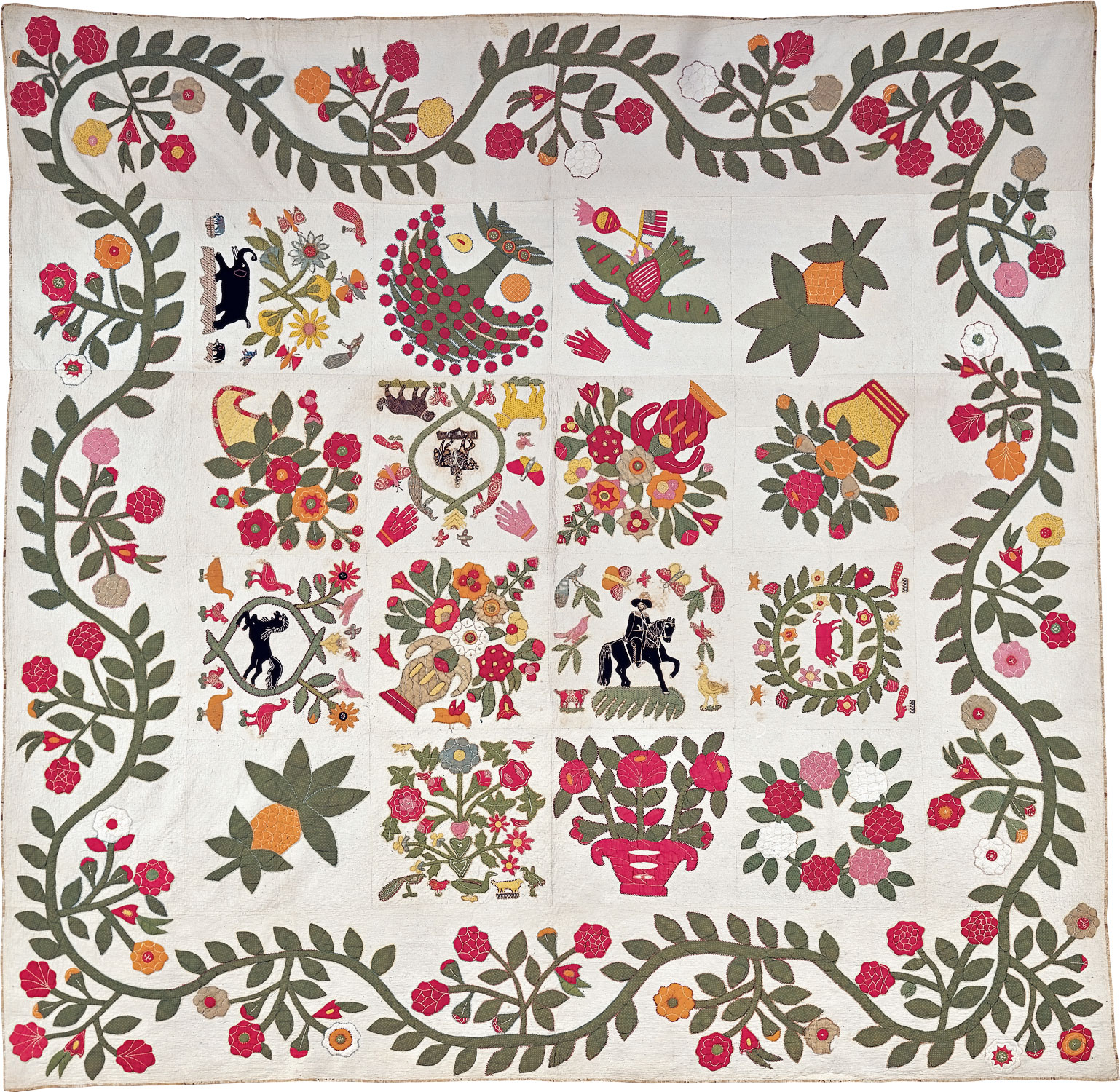 This is one of thirteen related quilts that may have been made by members of the Baltimore Hebrew Congregation. Because of their similarities and shared motifs, it is believed that one creative imagination may have designed the quilt blocks, though the quilts may have been completed by different hands. The running elephant is a recurring element, as is the mounted rider, who has been identified as Maryland-born hero of the Mexican–American War, Captain Samuel Hamilton Walker.

Friendship quilts consist of multiple blocks designed after a common pattern, often differentiated by a variation in color or the inclusion of individual signatures. Many friendship quilts were conceived as gifts, such as the Dunn Album Quilt and the Surprise Quilt Presented to Mary A. Grow. Such examples underline the commemorative or celebratory purposes fundamental to the form across its variations, often made as a marker of an important event such as a marriage or a departure from a community. 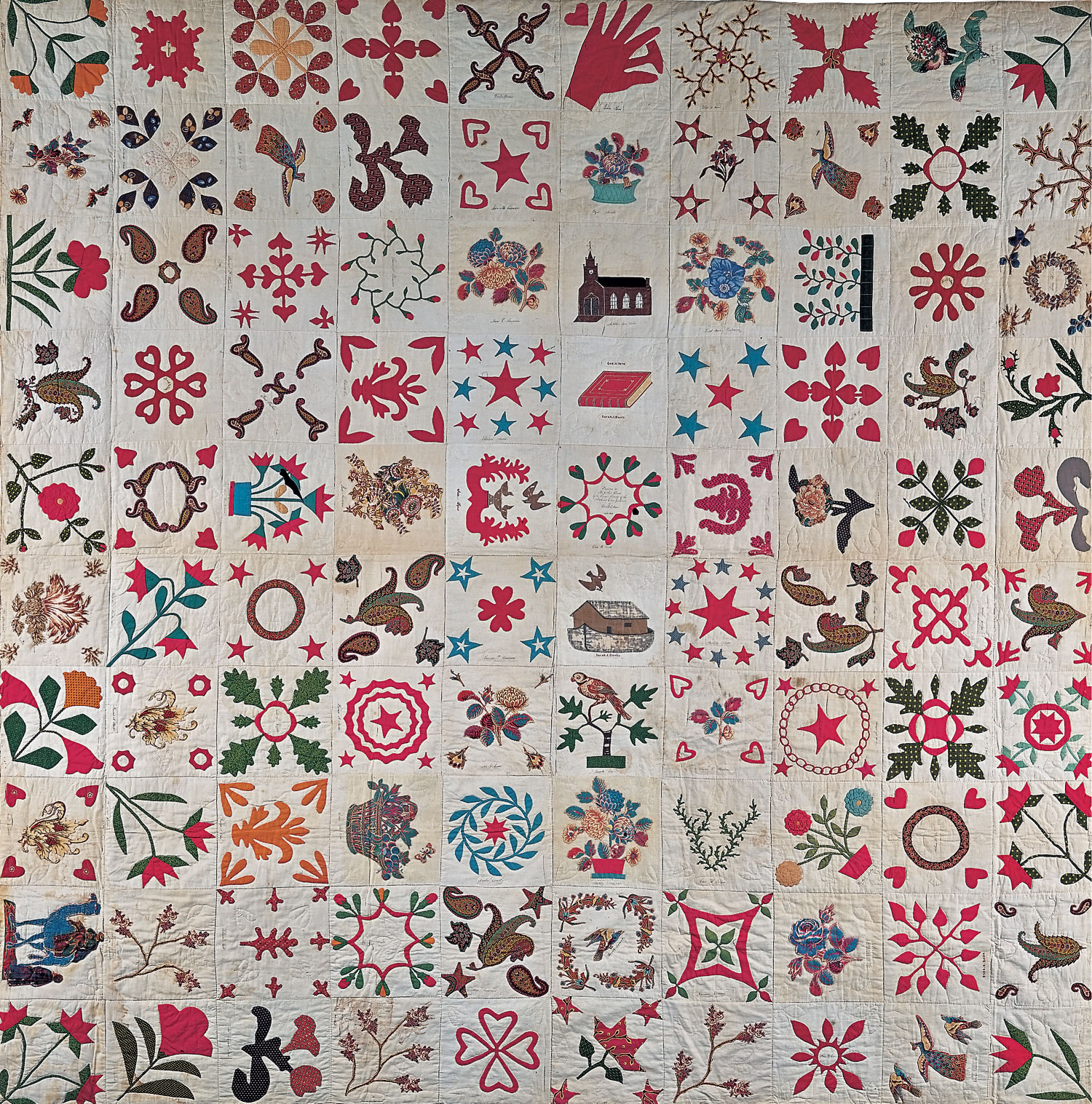 An inscription on this quilt states that it was presented in 1852 to Mr. (probably Reverend) and Mrs. Dunn by members of the Sewing Society of the Methodist Episcopal Church of Elizabeth Port, New Jersey. The quilt was probably made to commemorate the Reverend’s role in the establishment of a new Methodist congregation in Elizabeth. 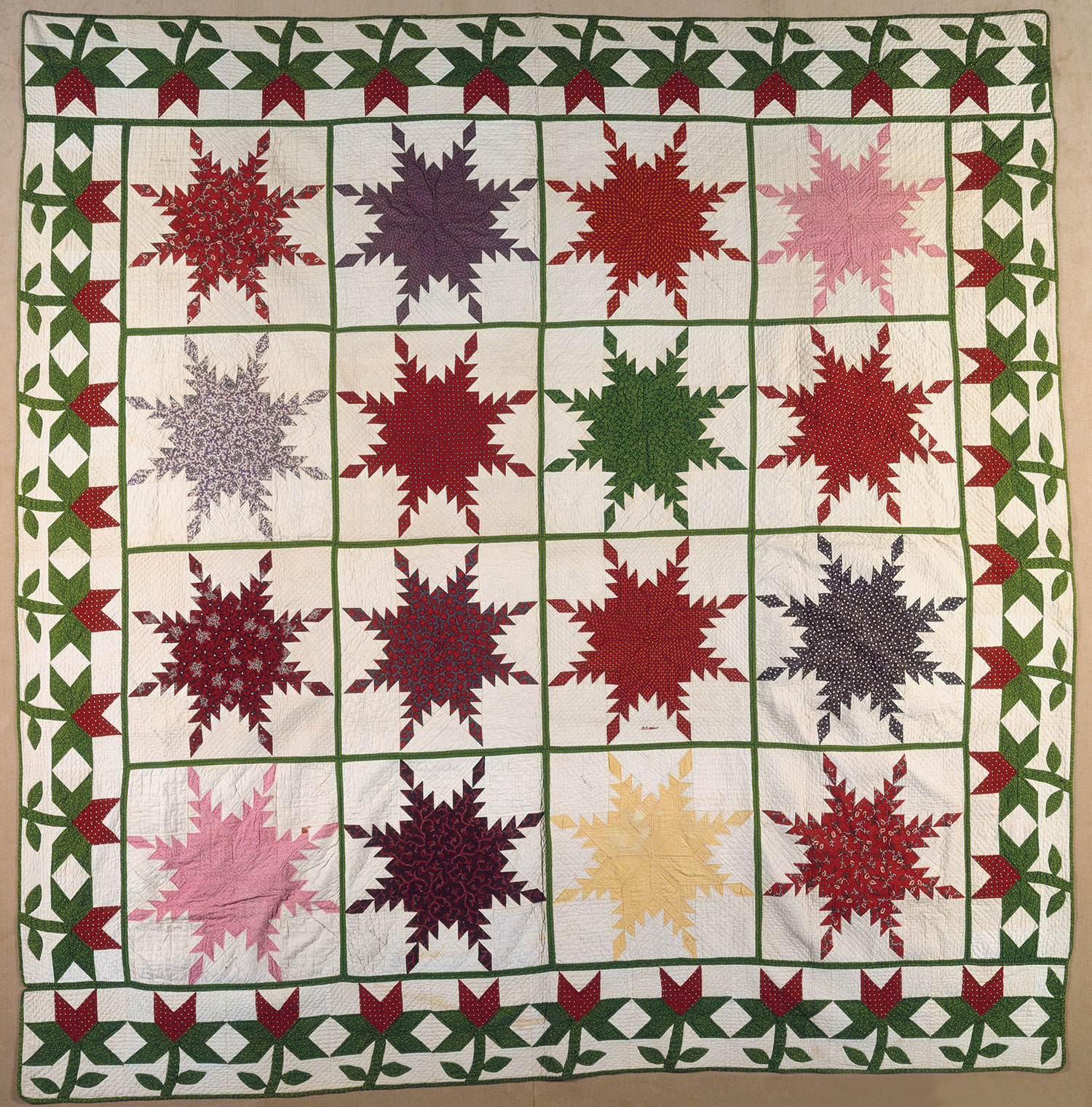 Surprise Quilt Presented to Mary A. Grow
Various Artists. Plymouth, Michigan, 1856. Cotton with ink and embroidery, 87 × 82 1⁄2 in. Gift in memory of Margaret Trautwein Stoddard and her daughter, Eleanor Stoddard Seibold, 2003.2.1

Although the occasion celebrated by this quilt is unknown, each block bears the name of a friend who contributed to a “surprise” for Mary A. Grow, as the quilt is inscribed in ink on the reverse. Mary Ann Hackett (1817–1896) was born in England and moved with her family to New York State, where she married William A. Grow, a minister. They subsequently moved to Plymouth, Michigan, where this quilt was made, and then to Pennsylvania. The quilt was obviously cherished over the years and descended in Mary’s family.

Taken individually, each one of the blocks in this exuberant quilt holds sufficient visual interest to comprise a quilt pattern of its own. Together, they constitute a virtuoso display of color, design, and creative imagination.

Fundraising quilts were assembled to benefit a charitable cause. Each participant made a contribution – for instance, a dime – in exchange for the inking or embroidery of their name upon a square. 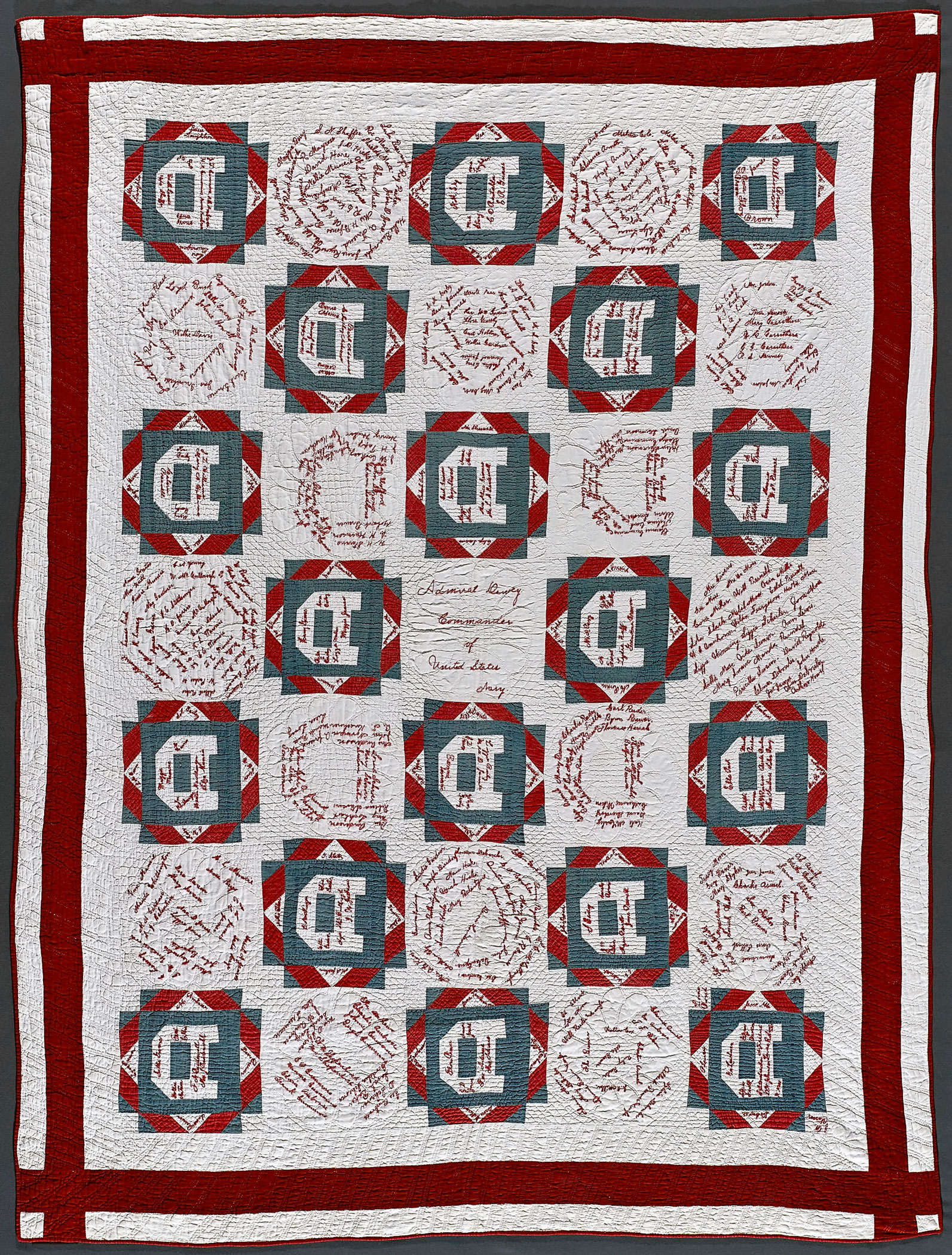 This fundraising quilt commemorates Admiral George Dewey, hailed as a naval hero after the Spanish-American War in 1898. Although no specific connection has been established between Dewey and the Indiana church for which the quilt was made, he was a popular figure, and multiple quilt patterns bearing his name were published in the early 20th century.

The quilt is thought to have been purchased in Indiana not long after its making by a Vermont-based family, the Griffins, who may have been especially drawn to the Dewey theme because of the Admiral’s Montpelier origins. In an amusing quirk – perhaps the quiltmaker’s error – the D’s have been incorporated backwards relative to the orientation of the central inscription. 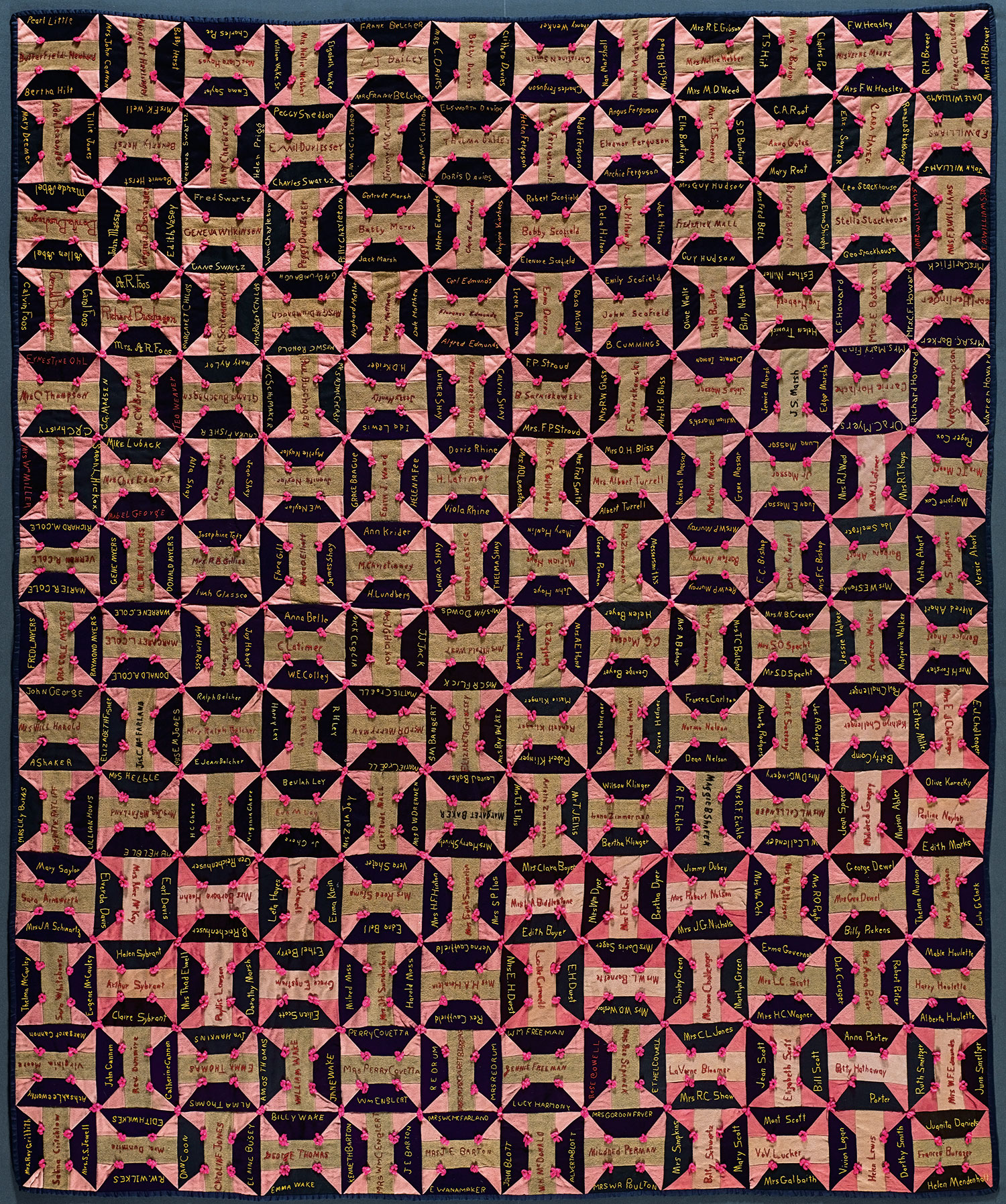 This quilt can be read as a visual pun, its reiterated spool block pattern making a playful reference to the quantity of thread and the repetitious labor involved in such a project. Although simple in concept – making use of just three colors and a single block design, tied together with bright pink knots – the offsetting black background and the dynamic alternation of spool direction make for an especially appealing result. Made during the Great Depression for the purposes of church fundraising, the quilt not surprisingly took top prize at a local fair. It was raffled off to the Massar family, whose name can be found multiple times across the surface of the quilt, memorializing their engagement with the church community.