This is the first of a series of essays that Americana Insights will be presenting about an early eighteenth-century New Jersey schoolmaster named Thomas Earl and the two copybooks known by his hand. While Earl has long been identified as a Rhode Island native who was born in Little Compton in 1704 and died in New Hanover, New Jersey in 1751, scholar Deborah M. Child has uncovered convincing evidence that earlier researchers mistakenly confused him with an unrelated namesake and that the Thomas Earl who created the books was actually an English immigrant who was born near London in 1711 and came to America as an indentured servant in 1731.

Beyond a few other bare facts, most of what is known about Earl can be gleaned from the two extant copybooks, also known as ciphering books, that he created in 1727 and 1740–41. This first essay by Deborah introduces Earl and his copybooks, explaining what they are, what they consist of, how they were found, and what is missing. Subsequent essays will explore who Earl actually was and what is known about his life and work, what his artistic sources and inspirations were, and how his works fit into the context of other ciphering books in early American education. 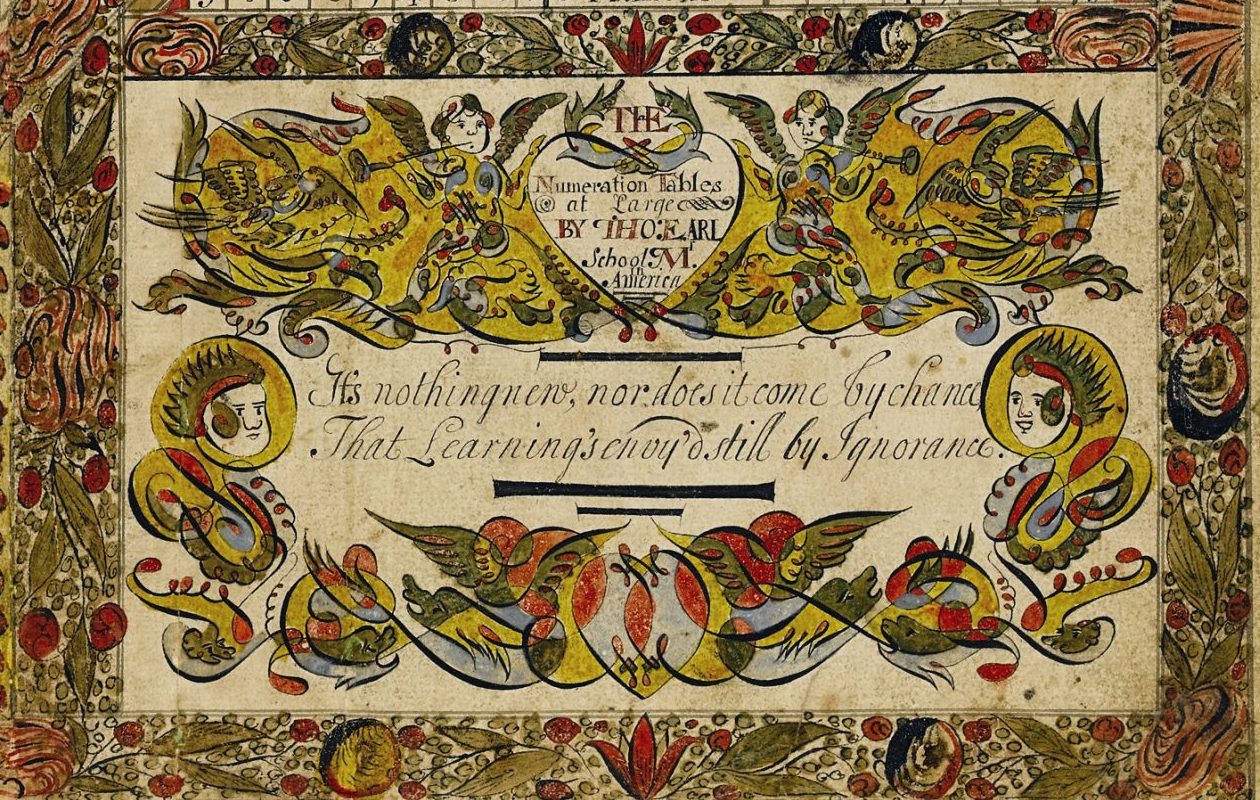 Thomas Earl’s two handwritten manuscripts are replete with lessons in arithmetic, geometry, trigonometry, navigation, and astronomy, which he enriched with calligraphic flourishes and stunning watercolor. The books not only served as essential teaching tools, but the second book in particular is tangible proof of his qualifications to teach. This was an occupation he clearly relished, as he signed the cartouche on one of its larger folio sheets “Tho. Earl School M[aster] America”. In the same manuscript, he proudly signed and/or dated another thirty-plus pages, dating from September 1740 to December 1741 (Fig. 1 & Fig. 1 Detail, Fig. 2). 1

Rather than standing in front of a class and lecturing, colonial schoolmasters like Earl made their copybooks accessible so that as students transcribed them, they would learn their lessons and, at the same time, create books of their own for future reference. This method of teaching was so widespread in America in the eighteenth and early nineteenth centuries, that copybooks were the most common books found in households after the Bible and almanacs. Some even became family heirlooms. For example, Joseph Riley, a New Jersey resident, specified in his will of 1734 that “his great [i.e., large] wrighting book and great arithematic book were to be given to his son Joseph [sic].”2 It was not until the 1840s, when textbooks and other printed material became more readily available, that copybook usage declined.3 Today, they are appreciated mostly for what they reveal about how education has evolved in this country.

Earl’s earlier manuscript, which is dated 1727 and therefore created while he was a teenage student in England, contains no Greek or Latin, while his second manuscript of 1740 has only a few lines in Latin on pages 466 and 478. This is in keeping with changes in the educational system in Britain and its colonies in the late seventeenth century in response to threats to its status as a world power, especially by the Dutch. Instead of providing instruction in these “dead languages,” as was done for those preparing for careers in law, medicine, and divinity, new curriculums were being developed to provide technical instruction in English to help students better prepare for careers in business, navigation, surveying, building, and engineering.4 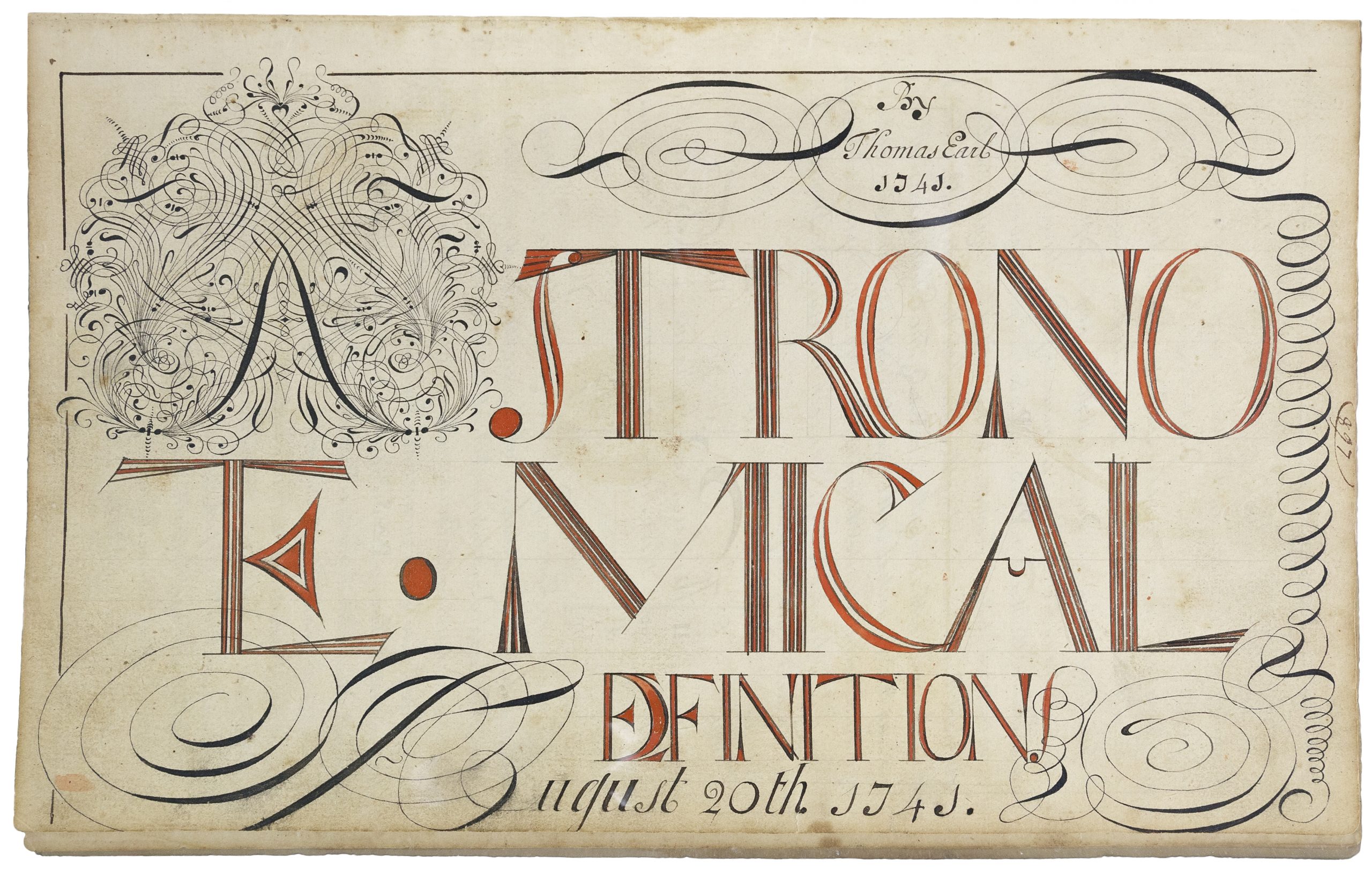 Fig. 2 Thomas Earl, Astronomical Definition, from his 1740/41 copybook, page 897. Inscribed “by Thomas Earl 1741.” at top, “TE” at left center, and “August 20th 1741.” at bottom. Ink and watercolor on paper. Newberry Library, Chicago.
One of the earliest surviving copybooks in colonial America reflecting an emphasis on practical education is the mathematical exercise book kept by New Jersey joiner Stacy Beakes (1706–c.1745). Now in the archives of Princeton University, it contains 230 folio sheets and was executed when he was a fourteen-year-old student. The teacher who provided the lessons Beakes copied into his own book has not been identified, but the book’s elaborate title page design, executed in ink, reveals another creative hand at work. The accounting lessons it contains would later prove essential for Beakes when he acquired his own cabinetmaking shop in Trenton, New Jersey. 5(Fig. 3)

The emphasis on practical education as demonstrated by the lessons in Earl’s copybooks was similarly fostered by Quakers, who largely settled the area of New Hanover where Thomas Earl resided. Quakers in this area maintained a close-knit network of property owners and artisans in West Jersey, on the east side of the Delaware River, who had easy access to Pennsylvania, Maryland, Delaware, and New York. Given the lessons that Earl could impart, Quakers may well have engaged his services as a schoolmaster.

Aside from the sheer beauty of Earl’s copybooks and their superb state of preservation, what is most outstanding is the unusually broad range of subject matter he covered, including astronomy, alphabets, weights, measures, currencies, computation of interest and discounts, algebra, geometry, trigonometry, astronomy, cartography, navigation, tides and currents, calendars and dates, and games of math and puzzles. (Fig. 4) 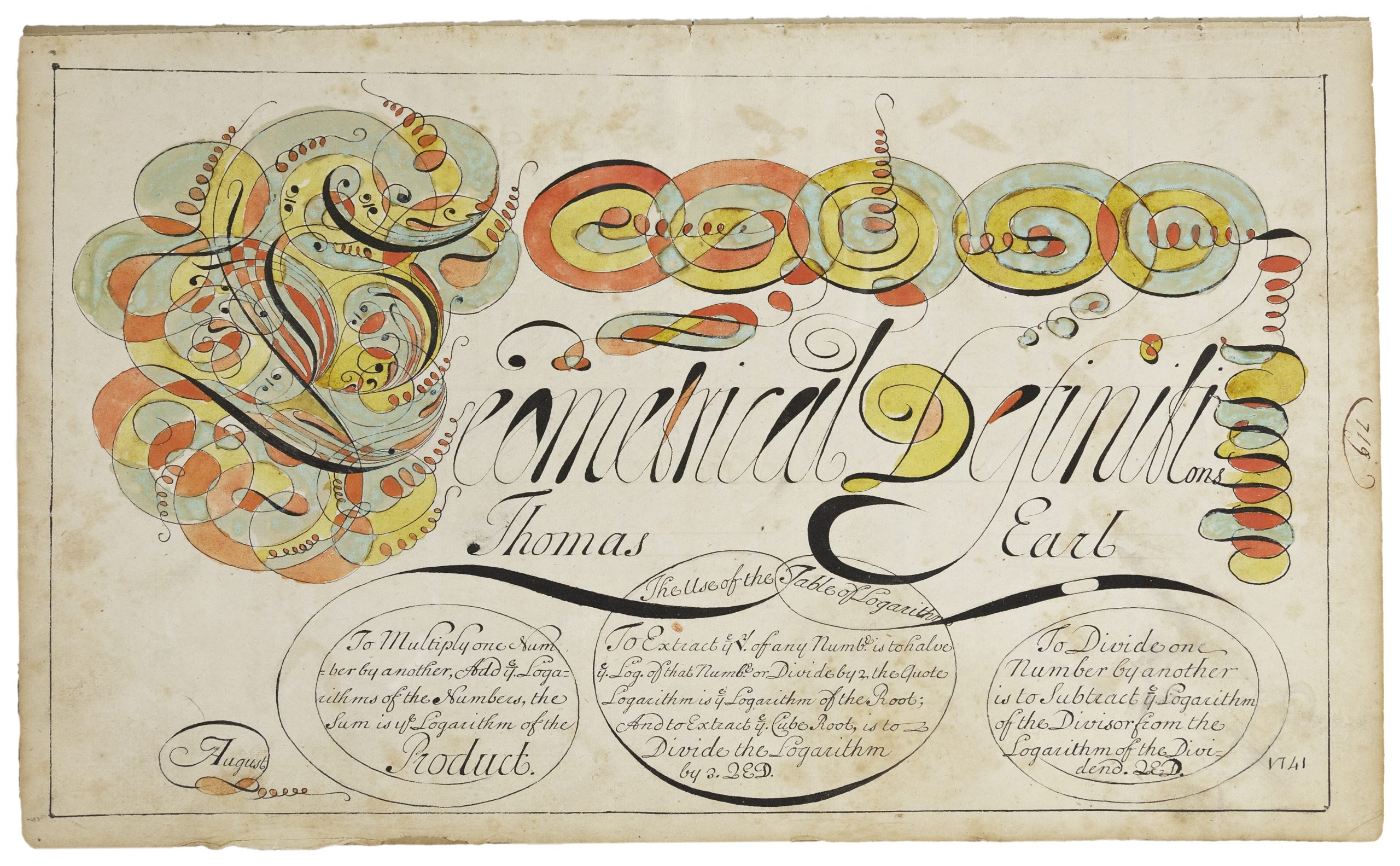 Fig. 4 Thomas Earl, Geometrical definitions / The Use of the Table of Logarithms, from his 1740/41 copybook, page 719. Inscribed “Thomas Earl” at center and “August 1741” at bottom. The bottom left text reads: “To multiply one number by another, add ye Logarithms of the Numbers, the Sum is ye Logarithm of the Product.” Ink and watercolor on paper. Newberry Library, Chicago.

Earl’s 1727 copybook consists of 183 pages on paper bearing the watermark of King George II, who ruled Great Britain and Ireland from 1727 until his death in 1760. It measures 12 3⁄8 by 7 ¾ inches and is bound in its original leather inscribed on the front “TE’S Book.” The pages are not numbered, and snippets have been taken from some of them.6

The lessons contained within encompass a broad range of subject matter from algebra to navigation and astronomy. Dates with the year 1727 appear in several of the word problems. Much of the text is written in calligraphy with headings in a decorative scroll. Geometric figures are often included to illustrate how the calculations are derived. Six pages that prefigure Earl’s later book are enhanced with watercolor washes, including The Fundamental Diagram for Astronomy, which is signed T.E. and dated November 24, 1727.7 (Fig. 5) 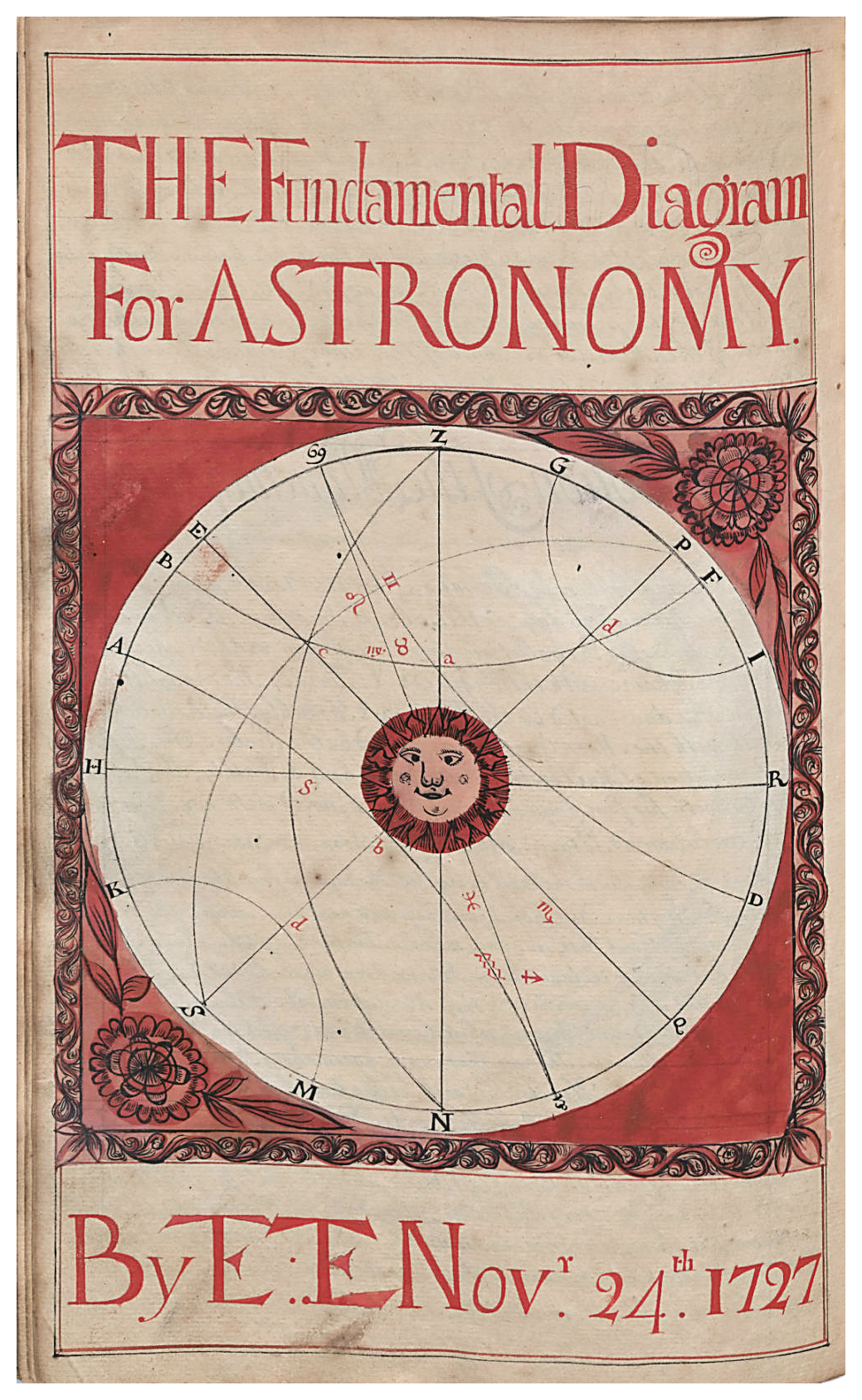 Fig. 5 Thomas Earl, The Fundamental Diagram for Astronomy, from his 1727 copybook. Inscribed “TE November 24, 1727”. Ink and watercolor on paper, 12 3⁄8 by 7 ¾ in. Courtesy, Winterthur Library.
Sometime around 1980, Earl’s second copybook, which has also been described as a calligraphic and computing instruction manual, was purchased from descendants of the artist in Pennsylvania by Dr. James A. Piccolo of Orange, Connecticut. At that time, it lacked a cover and consisted of 640 loose pages, again bearing the watermark of King George II. Unlike his earlier manuscript, these pages were numbered up to page 910 and measured 12 by 8 inches with an additional three folio sheets of Dutch-made paper measuring 12 ½ by 16 inches.8 (Fig. 6)

Fig. 6 Thomas Earl, The Mariner’s Compass, from his 1740/41 copybook. Ink and watercolor on paper, 16 x 12 in. Private collection. Photograph by Gavin Ashworth.
The coloring of this copybook is without precedent in this country at this early date and is also a testament to the care the Earl family had taken to preserve its contents. At the time of his purchase, Dr. Piccolo was told the artist made his own pigments. As there were few retailers of pigments in the colonies at such an early date, this assertion is probably accurate.9 (Fig. 7, Fig. 8)10 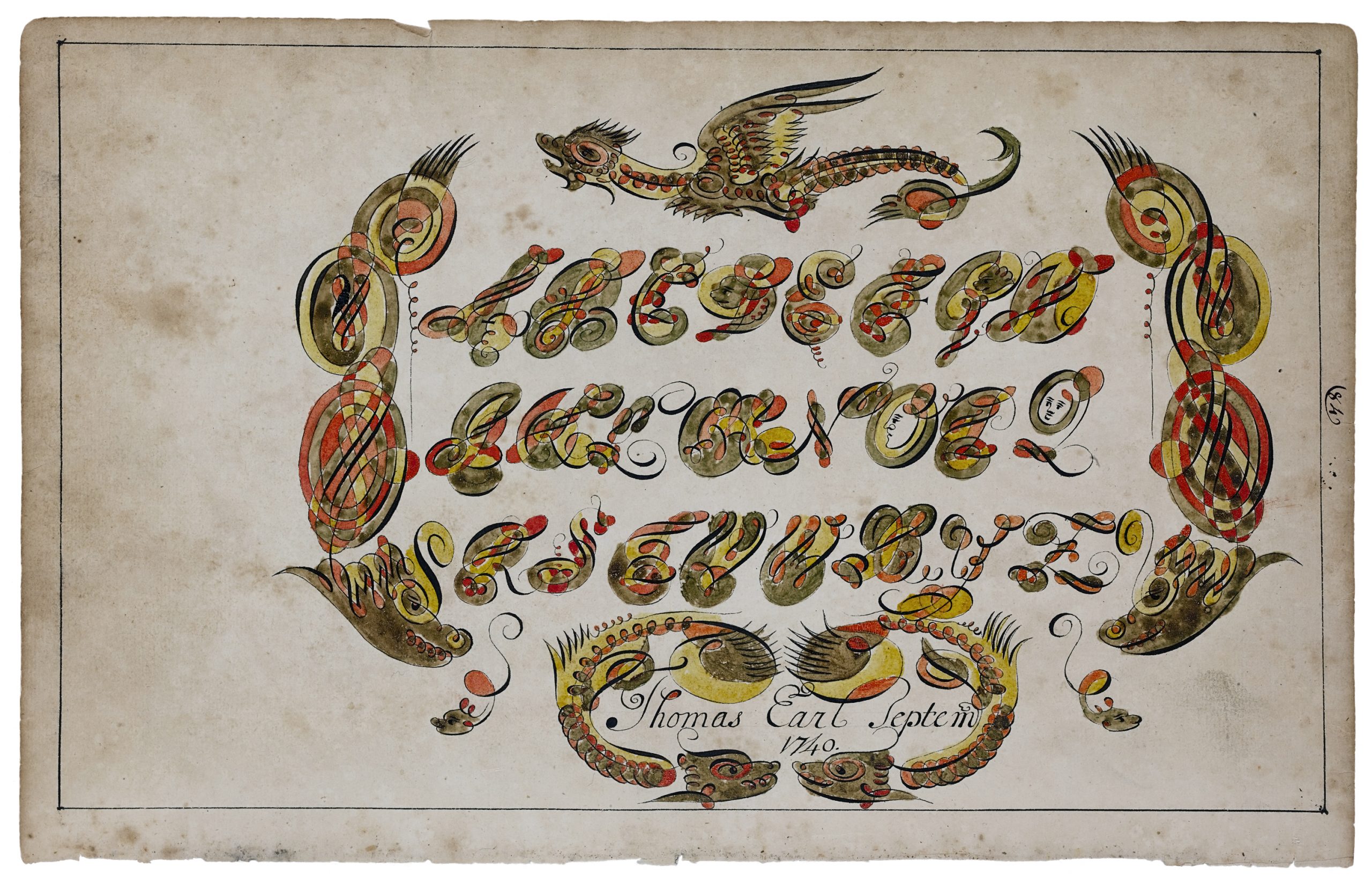 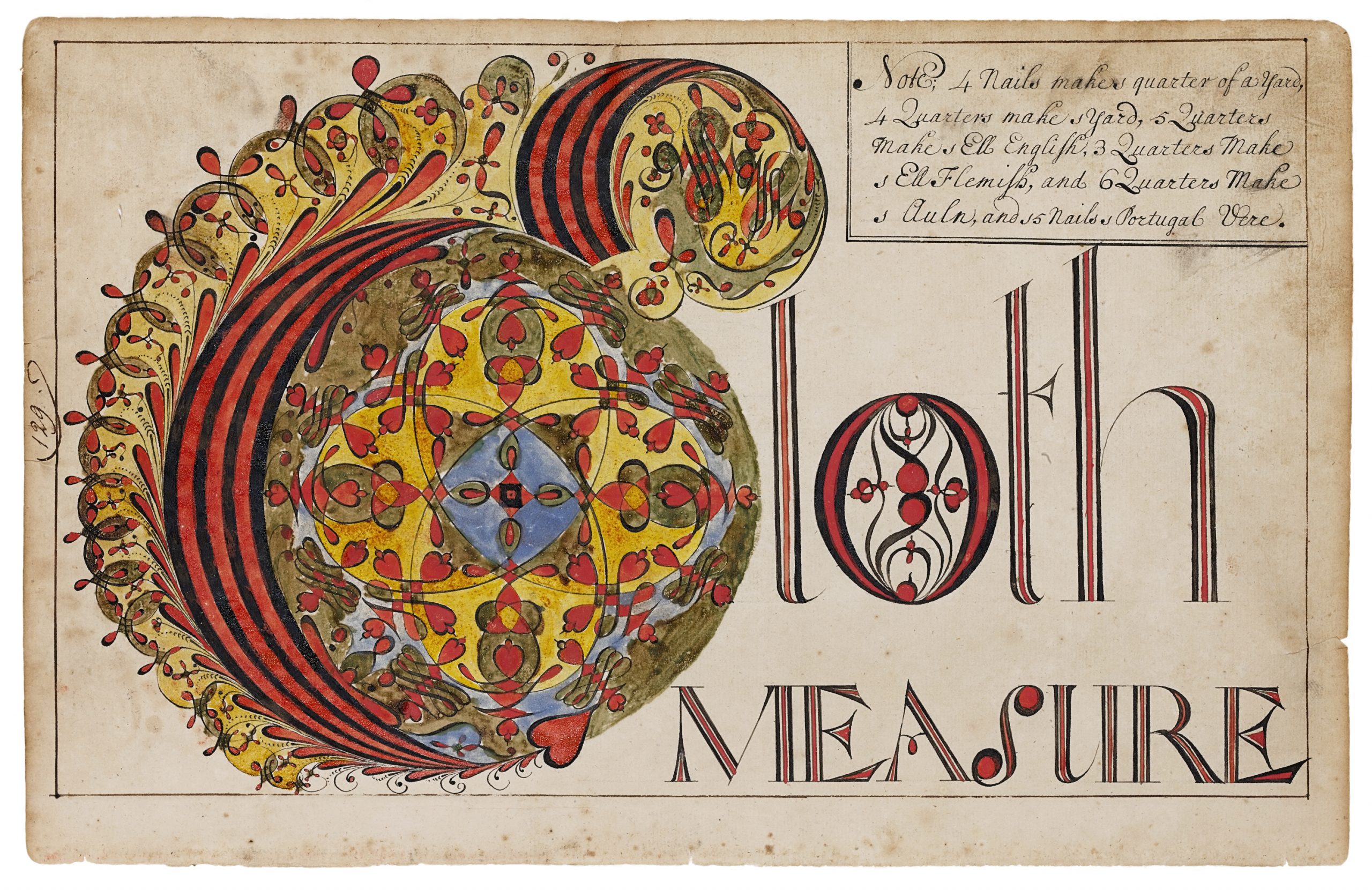 Fig. 8 Thomas Earl, Cloth Measure, from his 1740/41 copybook, page 129. Ink and watercolor on paper. Private collection. Photograph by Gavin Ashworth.
Despite the thirteen year gap between when the two manuscripts, many pages from Earl’s second copybook repeat some of the same text and illustrations found in his 1727 work, with only minor variations. These include his folio sheets titled English Empire, the Plain Sea Chart, the Ptolomaick System, the Copernican System, and the Tychonian System. (Fig. 9, Fig. 10, Fig. 11, Fig. 12) 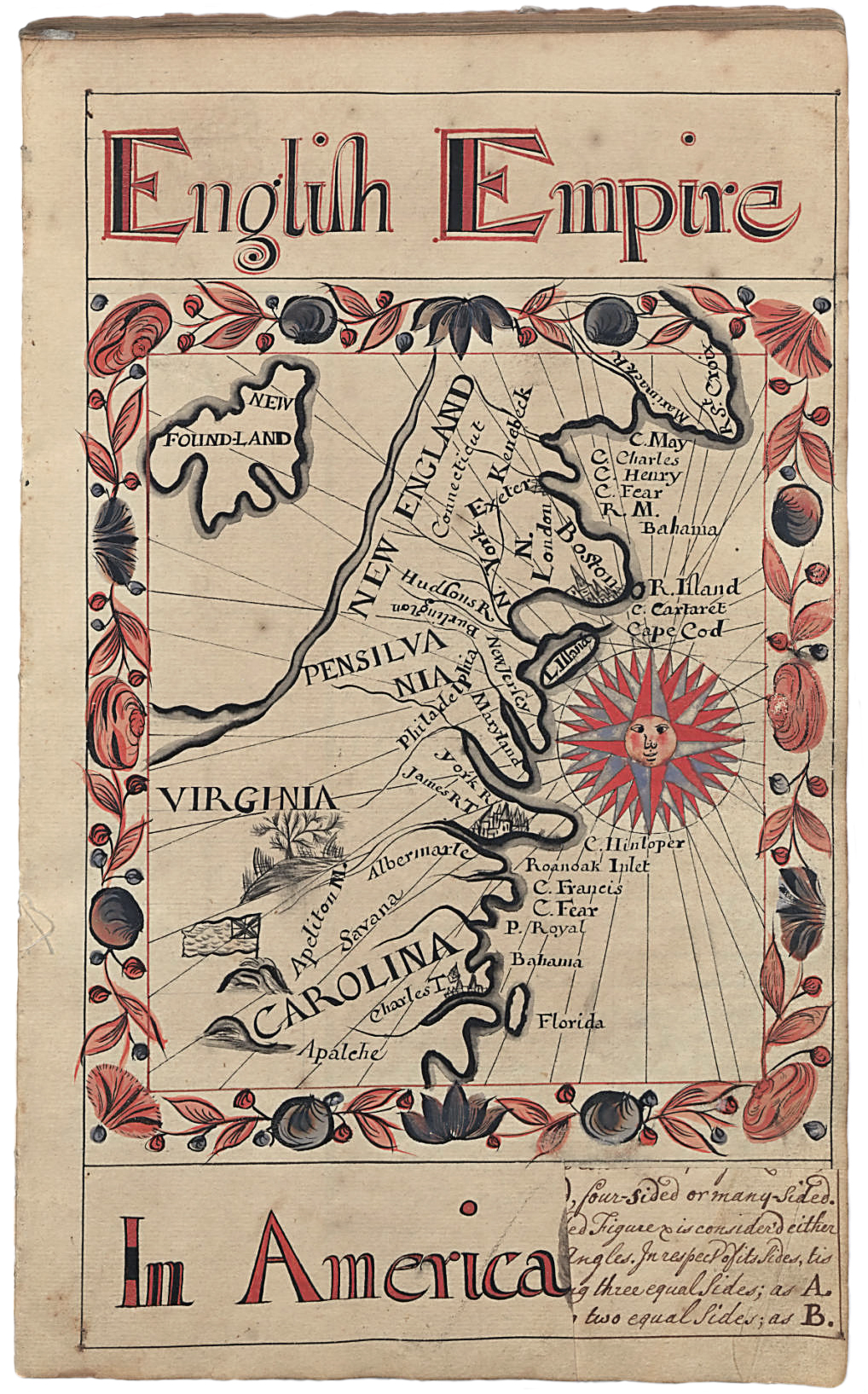 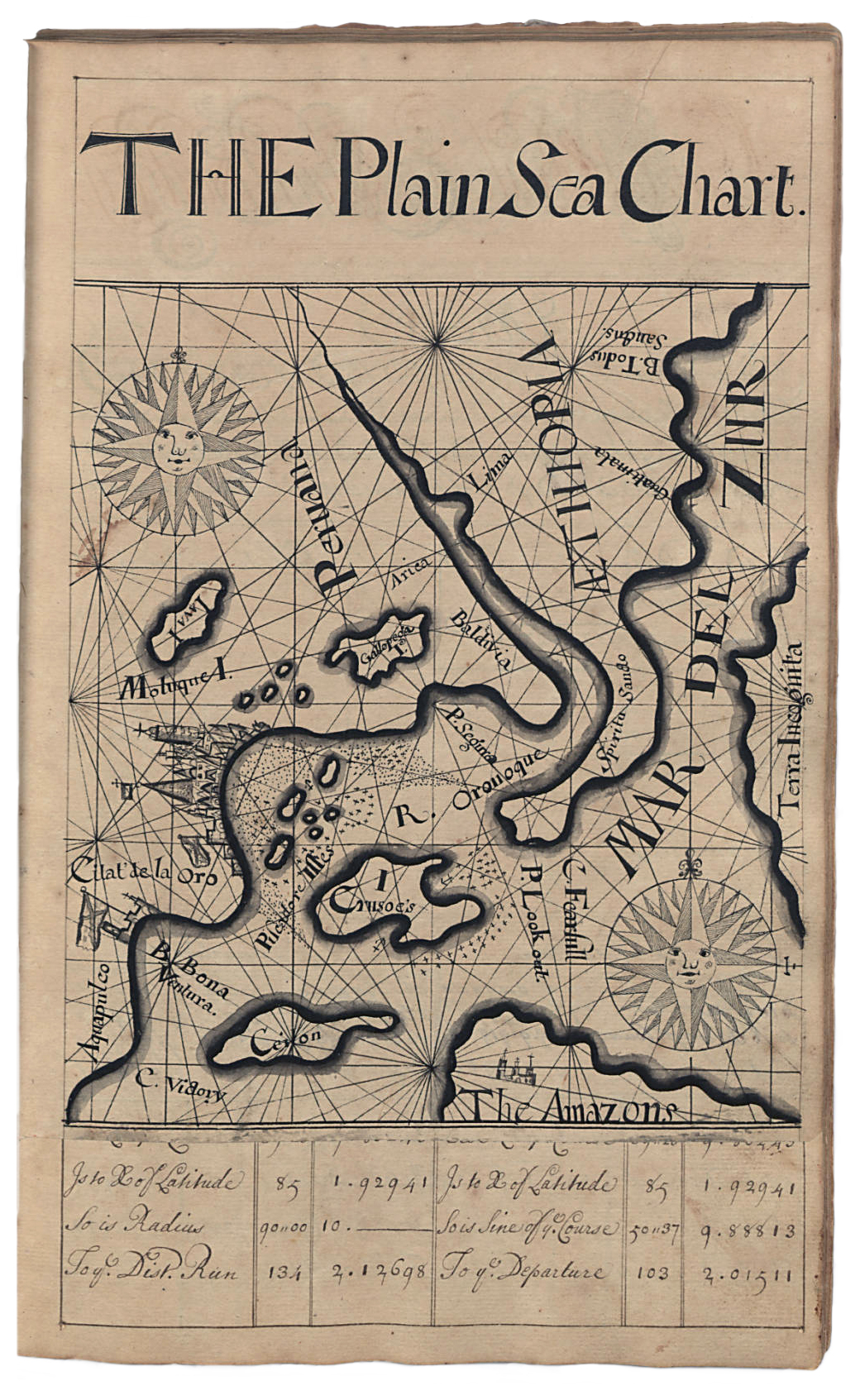 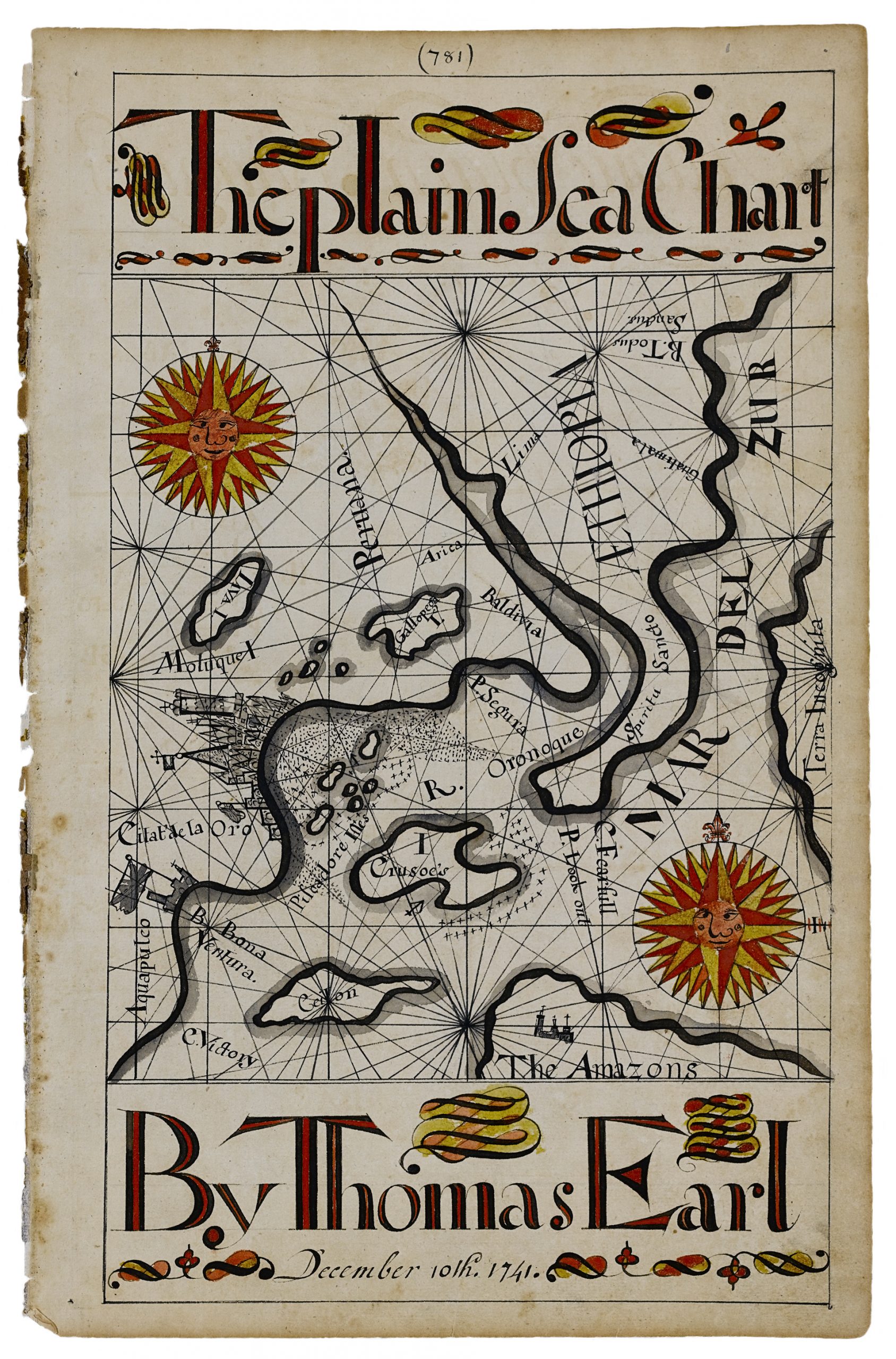 Earl’s later copybook is far more elaborate and detailed than the first, complete with title pages and three larger folio sheets. The first 124 pages are devoted to exercises in calligraphy. These were probably undertaken so he could offer his services as a writing master as well as a tutor in mathematics and navigation. Other pages in this book are much more advanced in both content and complexity, especially in mathematics. As such, he probably commenced the creation of his copybook in 1740 so that he could instruct older students in a more structured setting, such as an academy or college. 11

But who was this masterful artist and where did he obtain such high quality paper and pigments to work with? How did he find the time in 1740 and 1741 to add so many elaborate embellishments? These are just a few of the more pressing issues to be addressed in my next essay.

Deborah M. Child is an independent scholar and lecturer who has written widely on aspects of seventeenth-, eighteenth-, and early nineteenth-century American material culture.

6 Thomas Earl Exercise book, document 735, Winterthur Library, DE. It can be accessed on-line here. The book was given to the Winterthur Library in 1994 by Stanley P. Sax, a prominent Americana collector from Bloomfield Hills, Michigan. He had apparently purchased it from Alexander Acevedo, proprietor of the Alexander Gallery in New York City. When and where Acevedo acquired it is not known. Email correspondence Carley C. Altenburger to the author November 4, 2020.

9 Small hard cakes of soluble watercolor did not become commercially available until William Reeves invented them in 1780.

10 In the January 1986 issue of The Magazine Antiques, fine arts dealer Rudolph G. Wunderlich advertised these pages for sale. Several institutions and private collectors were interested in individual pages, but Wunderlich was unable to sell the manuscript in its entirety. In 1998, about half of the 588 pages from Earl’s book that were considered of lesser quality were sold to The Newberry Library, an independent, noncirculating research library founded in Chicago in 1867. On August 12, 2001, one of the larger folio sheets (12 x 16 ½ inches), titled A Beautiful Countenance and numbered page 55 was sold at a Skinner Americana auction in Bolton, Massachusetts. A label on the reverse identified the work as being page 82 from Practical Mathematics [Earl’s handwritten book]. No details of provenance were given at the time of sale. In 2005, Rudolph Wunderlich’s widow, Susan Mongerson Wunderlich, donated another seven pages from the book to The Newberry Library. In 2007, the Library purchased page 124 from an unknown source. (Eight pages in the Newberry Library collection can be found by searching for Thomas Earl, Newberry Library at www.alamy.com)

In 2009, another fifty-eight pages, representing the aesthetic core of the manuscript, surfaced at a benefit appraisal day held for Connecticut Public Television. They were brought to the appraisal by two of Dr. Piccolo’s daughters, who commissioned Connecticut dealer and appraiser Allan Katz to try to sell them. Katz took the manuscript to the Philadelphia Antiques Show in April 2010, where he exhibited eighteen pages he had framed, with the remaining forty contained in two portfolios. Katz intended only to sell individual pages, but fellow Connecticut folk art dealer David A. Schorsch, whose mother Marjorie had tried to convince a prominent client to buy the entire manuscript from Wunderlich, remembered the work well and thought it should be kept together. After discussions with his business partner Eileen M. Smiles, the pair approached a visionary client who agreed to acquire all the remaining pages of the work. Those pages still reside in that private collection today.

READ THIS ESSAY IN BOOK VIEW